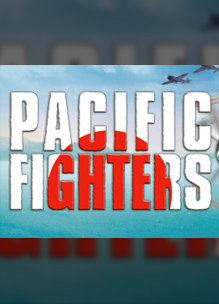 The standalone release may have been delisted due to publishing changes between 1C and Ubisoft around this separate title. It is also possible that it was delisted to incentivize purchases of the all inclusive 1946 release which was updated to include the Pacific Fighters content along with other IL-2 expansion packs. IL-2 Sturmovik: 1946 and the Pacific Fighters content remain available on Steam as of this writing.

The award-winning flight combat from Oleg Maddox’s IL-2 series moves the setting from the Eastern front to the fierce combat of the Pacific theater. Allied fighters and bombers square off against the notorious air power of the Japanese empire. For the first time, a large variety of British aircraft will be included along with the U.S. and Australia. Target enemy ships, vehicles, airfields, and a host of AI-controlled aircraft. Re-enact some of the most famous air battles of WWII in places like Pearl Harbor, Guadalcanal, and Iwo Jima.