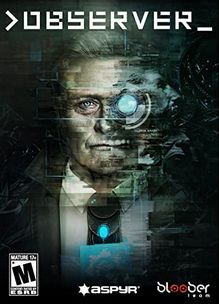 Observer (stylized as >observer_ ) was delisted on Steam on August 27th, on PlayStation 4 between August and mid-October, and on GOG.com by early November of 2020. Developer Bloober Team took over publishing duties for the game from Aspyr in the Fall of 2020 and released the enhanced System Redux version with additional content in November on PC, PlayStation 5, and Xbox Series X|S.

It is not clear if the change in publisher, the release of System Redux, or both are the cause for the delistings. Bloober Team clearly wanted to please fans with an improved version of the game but possibly sought to avoid confusion between the two releases. This led to a period of time where no version of the game was available on Steam or GOG.com and has left those with underpowered PC hardware no way to play the game. On consoles, the original version of the game remains available on Nintendo Switch and peculiarly on Xbox One. This release is expected to be delisted as well.

Discover a dark cyberpunk world beset by plagues, war and squalor. Play as the new front line of neural police known as observers as you hack into the jagged minds of the people you encounter.

Thanks to Robert I for submitting this game to the site