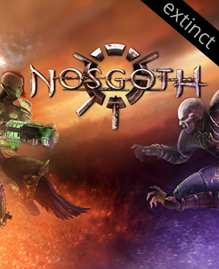 On April 8th, 2016 Square Enix’s community manager for Nosgoth, Chris Murphy, posted an update to the game’s Steam community detailing the end of life for the game. After a recap of the two-and-a-half year development cycle that saw the game through closed Alpha, Beta and Early Access releases, Murphy announced that Nosgoth’s servers would be shut down on May 31st, 2016. He explained the shutdown by stating that the “audience hasn’t grown enough to sustain ongoing operations.”

On June 1st, 2016 Murphy confirmed in a reply on the Steam community forum that the game was indeed finished. “It is no longer possible to log in to Nosgoth.”

“Developed by Psyonix, Nosgoth is a unique team-based player-versus-player game pitting a variety of brutal Human and Vampire characters in a fight for survival.  Created as a competitive free-to-play title in order to break down barriers between the creators and the players, Nosgoth doesn’t include weapons, items or abilities that are inherently better (aka supremacy goods).  All items in the Nosgoth in-game store are side-grades not upgrades to create a fair game experience based purely on skill.“

Nosgoth is a fast paced, intense team-based competitive PvP game set in the dark fantasy universe of Legacy of Kain.  Nosgoth is a free-to-play game from the same developers who brought you Rocket League.

Nosgoth was initially made available in a Closed Alpha state the week of October 24th, 2013. A Closed Beta began the following year on February 27th, 2014 with an Open Beta/Steam Early Access launch on January 21st, 2015. Square Enix announced that Nosgoth had been downloaded one million times as of February 3rd, 2015 and revealed new classes and maps shortly thereafter. October 2015 saw the launch of the game’s first season of monthly ranked matches with prize money given to the top 100 global players.

Another new character class was revealed as late as February 2016 with developer Psyonix talking up further content updates. An investigation of  Steam Charts by Polygon on April 8th revealed that in the previous 30 days an average of only 930 players were logged into the game at a time.