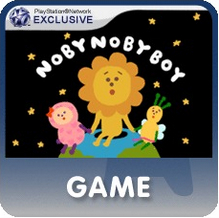 Noby Noby Boy was delisted on PlayStation 3 no later than April 25th, 2018. On that day tweets and a forum thread on PSNProfiles.com began questioning the game’s availability. Tweets directed at Keita Takahashi, the game’s creator, have so far gone unanswered. According to the same PSNProfiles forum thread, the game could continue to be played and new “length” could be reported to the server to make progress in the game.

Takahashi was worried about the time it would take players to complete the game’s collaborative goal of pushing Girl through the cosmos by reporting the length they had stretched during their play sessions to a server. Several “Lucky Week” events took place in 2009 and 2010 where the length that players reported would be multiplied. Through the years this multiplier was added permanently so that the length reported by each player was being multiplied by thousands of times. On December 14th, 2015, the multiplier increased to 2,000,015 which rapidly completed the length required to push Girl to the end of her cosmic journey. This was the last time the game was routinely covered in the gaming news scene and so it may have been removed long before April 2018 when people first noticed its absence.

It is worth noting that the iOS Noby Noby Boy app — which was more a collection of diversions than a direct port from PS3 — was released in February of 2010 and removed from the iTunes App Store in October of 2012.

You and countless other BOYs across the world explore and interact with objects in dozens of surreal worlds, where play is limited only by the boundaries of your imagination! The more everyone stretches, the longer the whimsical character by the name of GIRL will grow—starting from Earth and reaching other planets in the Solar System, unlocking new levels along the way!

Version 1.1 now adds an offline multiplayer mode where you and up to three of your friends can bring your BOYs together for a romping good time! Fart BOY, another bizarre new feature makes BOY announce the name of the objects he farts out! Try these and even more surprises in the zany world of NOBY NOBY BOY™!