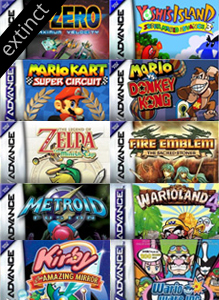 Nintendo launched the Ambassador Program to compensate 3DS owners who purchased the handheld at or near its launch in 2011. Within the first five months of launch Nintendo drastically reduced the handheld’s price and offered 20 downloadable NES and Game Boy Advance games to those early adopters.

The 10 NES titles (Super Mario Bros, Donkey Kong Jr, Balloon Fight, Ice Comber, The Legend of Zelda, Metroid, NES Open Tournament Golf, Wrecking Crew, Zelda II and Yoshi) were subsequently released to the 3DS eShop for purchase in all territories. The 10 Game Boy Advance titles (listed below) remain exclusive to ambassadors and were only available to those who logged onto the 3DS eShop by August 21st, 2011. As such, they are considered permanently delisted on the handheld. All 10 games, however, are available for purchase on the WiiU eShop with the exception of Mario vs Donkey Kong which is only downloadable in Japan.

Due to the unexpected qualification to receive these titles they were technically delisted 3 months before their own release. It’s a Delisted Games record!