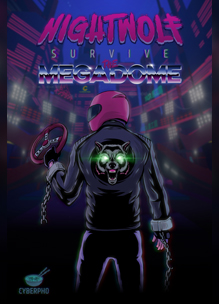 Nightwolf: Survive the Megadome was delisted on Steam on December 2nd, 2020. The game’s release date after Early Access was pushed back to June 11th citing the small team and number of issues to address. It appears that CYBERPHO disbanded shortly after the game launched and failed to gather an active player base. No announcement was made leading up to the game’s removal or the studio’s closure. The CYBERPHO website was shut down between November and December of 2020 although the game’s Twitter and Facebook accounts remain accessible as of May 2021.

Inspired by cult titles such as Interstate ’76, Vigilante 8 series, Twisted Metal, 80’s VHS action flicks, mixed with high – octane, synth music and rogue lite mechanics Nightwolf: Survive the Megadome is a new take on vehicular combat genre. You play as a contender in world’s most famous blood sport arena – The Megadome, where you have to make your stand against some of the most dangerous motorized killers out there. You are the modern day gladiator, your ride is your weapon, and your fame can mean the difference between death or glory.