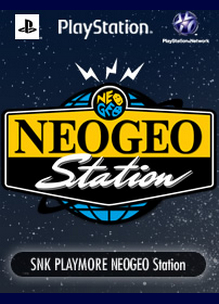 All of the titles released under the NEOGEO Station banner for PlayStation 3 and PlayStation Portable were delisted during late Summer 2012. The earliest mention of their delisting was found in August on a GameSpot forum but SNK’s final “End of Summer Sale” on the titles in North America ran through September 25th. The reason for the NEOGEO Station delistings is unsubstantiated but our theory follows.

NEOGEO Station was launched as an exclusive platform to differentiate itself from other titles on the fledgling PlayStation Store. By 2012 it is possible that SNK didn’t see the need to segregate its releases or wanted to separate them from the branding to release on other platforms.

This would’ve required re-releasing them on PlayStation Network as new, individual titles. This would mean those who purchased the NEOGEO Station versions would have to re-buy the games or SNK would have to offer a means to upgrade or transfer ownership. It is also possible that the games were delisted to incentivize purchases of the Neo Geo X which would launch in December of 2012.

Peculiarly, several other SNK titles (Alpha Mission, Time Soliders, Gang Wars, Ikari III, and more)  remain available on the PlayStation Store as of June 2020, however none of the NEOGEO Station titles returned until Hamster’s Arcade Archives series began in late 2016 on PlayStation 4.

“NEOGEO Station is a game service that allows the player to take full advantage of high-quality PlayStation®3 and PSP® (PlayStation®Portable) system ports of NEOGEO titles, games that overturned the basis of videogames in the 1990’s. You can enjoy the original version of the NEOGEO games you buy on the PlayStation®Store, and moreover, can play in Versus Mode and in Cooperative Mode on PS3™ system with the Online NETWORK MODE function. Similar functions are also available on PSP® system via a Wireless LAN connection (Ad hoc Mode).

In addition, NEOGEO Station features many options that didn’t exist at the time of the NEOGEO ROM system: along with common features such as changing the button configuration and display / screen size settings, the possibilities to save and replay your gameplay (replay data) at any time allows you to enjoy the NEOGEO games even more.“
– NEOGEO Station homepage

“SNK PLAYMORE USA CORPORATION announced that they will be launching the NEOGEO Station on the PlayStation® Network to celebrate the 20th anniversary of the NEOGEO videogame system on December 21st, 2010.  The NEOGEO Station will be a continuously growing’ library of classic NEOGEO games available via the PlayStation Network for $8.99 per title for PS3 and $6.99 per title for PSP.”
– Press Release