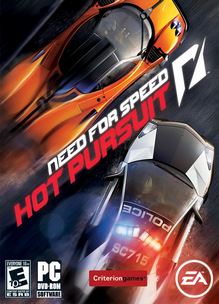 Punch the needle through the red line when you download Need for Speed™ Hot Pursuit on the PC.The Game Critics Awards recipient for Best Racing Game of 2010, Hot Pursuit is a racer’s dream: powerful cars, top-notch competitors and plenty of rubber-burning mayhem.

Need for Speed™ Hot Pursuit sets you loose on the wide-open roads of Seacrest County, chasing the horizon through a series of diverse and stunning landscapes. Step behind the wheel of dozens of high-end machines — ranging from the Lamborghini LP 670-4 to the Porsche Panamera — all rendered in perfect detail from their real-world counterparts. Take on the role of a daredevil street racer, or a police driver chasing him down. Throw down spikes and roadblocks to trap your quarry, or drop obstacles to stop the cops in their tracks.

Earn bounties to unlock newer, faster cars or upgrade your own with high-end equipment. You can even jump online: challenging your friends and racing in multiplayer competitions with up to eight other drivers. The Autolog option lets you publicly post your speed records and achievements, then check your friends’ scores to see who left’s to beat. Need for Speed™ Hot Pursuit for the PC delivers the best white-knuckle driving action in all of gaming, but watch out: the crashes out here are as spectacular as the cars.