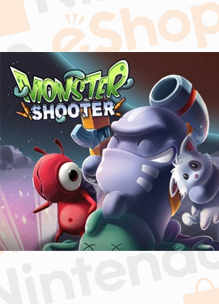 Monster Shooter was likely delisted from the Nintendo 3DS eShop in North America and Europe between March of 2018 and July of 2020. As of February 2022, Monster Shooter remains the only title from Gamelion to be delisted in these regions making it difficult to guess the reason behind its removal.

By May 18th, 2021, Teyon had updated the remaining pages on the Japanese 3DS eShop to inform users that several titles, including Monster Shooter, would be delisted in the region at “10:00 on May 26, 2021 (Wednesday)”. No reason for the delistings was given but only the Gamelion titles published by Teyon were removed, suggesting an expired publishing arrangement between the two may have been the cause.

Meet Gamelion’s new free-to-play top-down action shooter! Monster Shooter is the first shooter created for both casual players and hardcore alien exterminators.Stand tall against an onslaught of monstrous mayhem. Undertake an epic quest in Story mode, or risk your life in “Survival of the Fittest”. Watch your leaderboard ranking rise as you master the art of annihilation using shotguns, plasma rifles, electricity guns, grenades, rocket launchers and even…wait for it…the NUKE!

Thanks to L.J. for submitting this game to the site