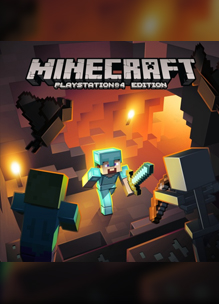 Minecraft: PlayStation 4 Edition was delisted on December 9th, 2019, one day prior to the release of Minecraft (aka Minecraft Bedrock Edition) which replaced the older version. The original release for the PlayStation 4 was replaced to incorporate “Bedrock” features including cross-platform play. Like other, older delisted console releases, the PlayStation 4 Edition remains downloadable for those who had previously purchased it. The updated Bedrock version is also a free download to owners of the original release.

In Minecraft: PlayStation 4 Edition, your adventure starts with your imagination. Break blocks, place them and then do whatever you want. Perhaps you’ll see how deep you can dig? Or maybe you’ll build a shelter before the night monsters appear? From the simplest homes to the grandest castles, the humblest ideas to the most ambitious plans, how you play is up to you.

Be brave, be curious and be inventive. Create anything from a simple boat to entire cities. Play alone or with up to seven PlayStation Network friends.

Thanks to Rafi H. for submitting this game to the site