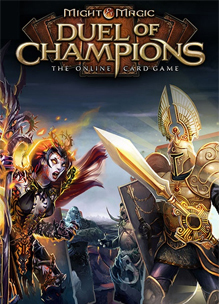 Ubisoft announced on August 23rd, 2016 via the game’s official forum that Might & Magic: Duel of Champions for PC and Steam would be shut down on October 25th, 2016. The PlayStation 3, PlayStation 4 and Xbox 360 versions of the game — released with the subtitle Forgotten War, a standalone iteration of Duel of Champions — were delisted immediately. Online functionality for these versions is scheduled to be disabled on September 24, 2016. The iOS version of Duel of Champions has also been delisted. A somewhat generic explanation for the shutdown of this and three other free-to-play titles was given.

The game was originally developed by Ubisoft Quebec but by May of 2015 development had been passed on to Ubisoft Chengdu.

“Enter the legendary universe of Might & Magic with this fantastic strategic online card game. With more than 770 cards, choose your hero, build an army with creatures, spells, buildings and fortunes and defeat cunning opponents in battles of epic proportions.“