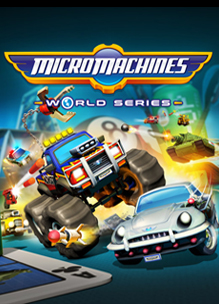 Micro Machines World Series was likely delisted on PlayStation 4 and Xbox One by the end of March or early in April of 2021. The game was last featured in a March 23rd PSN sale in Europe, while a Google Cache archive confirms that it was still available as late as March 29th. The cause for the delisting most likely relates to expired licensing of the Micro Machines property from Hasbro. The game features other Hasbro properties as well including Hungry Hungry Hippos, NERF, Ouija, and G.I. Joe. As of this writing it remains available on Steam but is expected to be delisted there as well.

Legendary gaming franchise, Micro Machines, raced its way on to PlayStation® 4 computer entertainment system, Xbox One, Windows PC, Mac and Linux in June 2017. Micro Machines World Series retained the manic social gameplay of the classic series, updated with stunning HD visuals that saw fans of the franchise return to the garden, kitchen, workshop and many more great locations in an array of amazing miniature vehicles.

In addition to classic game modes such as Race and Elimination, Micro Machines World Series introduced all new Battle Arenas which allowed players to wreak mass destruction on a miniature scale against friends or the AI. Meanwhile, Team Play let players work together on using their vehicles’ unique skills in modes such as “Capture the Flag” and “King of the Hill.”

Designed around fun gameplay at every turn, Micro Machines World Series is the ultimate pick up and play experience for players of all ages and abilities, offering intuitive, easy to learn controls that make the controller impossible to put down.

Thanks to @Krismagix for submitting this game to the site