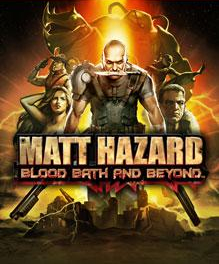 Matt Hazard: Blood Bath and Beyond was delisted from the European PlayStation Store for PlayStation 3 no later than March 13th, 2018 when it was submitted to the site by reader T87. The game was most likely delisted before 2018 but we have yet to find any other confirmation or explanation.

One presumption is that it would’ve been delisted around the five-year mark from release which would put it around 2015. However, the game remains available digitally in all other territories, leaving its European disappearance quite a mystery, for both why and when.

“Introducing the ultimate arcade action experience for hardcore video game fans! Matt Hazard: Blood Bath and Beyond is an homage to the greatest side scrolling action video games of all time. Starring classic action hero Matt Hazard and all his greatest enemies, it features tons of weapons, nonstop explosions, and gorgeous 3D environments. Battle everything from evil ninjas to killer penguins. Survive incredible boss battles. And – of course – enjoy side-by-side 2 player gameplay. Enjoy nonstop run and gun survival at its finest in an over the top modern vision of timeless video game themes.“

Thanks to T87 for submitting this game to the site.