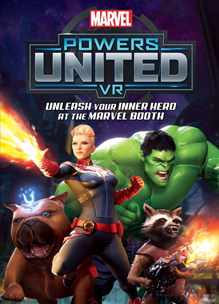 An email from Sanzaru Games and Oculus was reportedly delivered to owners of MARVEL Powers United VR on December 1st, 2020. This email announced that the game had already been removed from sale and that it would become unplayable for existing owners after March 1st, 2021. The game’s single-player mode was only accessible if no other players could be found for matchmaking, indicating that the title was always-on and required a server connection in order to play. The message from the team’s email follows:

You are able to continue playing the game through March 1, 2021, but MARVEL Powers United VR is no longer available for new users to purchase or download. We recommend that you delete the game prior to March 1, 2021, to avoid dead space taken up on your device.

A retail Oculus bundle including the game was released in July of 2018 but the box indicates that only a download code for the game is included but is likely invalid for redemption after December 1st, 2020.

Assemble your ideal Super Hero squad to defend the galaxy in explosive and immersive co-op fights across iconic Marvel locations. Unleash the strength of Black Panther, smash foes as Hulk, wield Deadpool’s katanas—or choose from a roster of 18 of Marvel’s greatest heroes. Get ready for battle with iconic character powers, over-the-top ultimate abilities, and a full-body transformation only possible in VR.

UNLEASH YOUR INNER HERO
Be the hero — with the power of Rift. Transform into your favorite Marvel Super Hero and wield their amazing powers and weaponry in your hands. Move freely through iconic Marvel locations on the ground, in-flight, or with special moves with intuitive controls and smart locomotion.

SQUAD GOALS
Defend the galaxy on your own or call in friends to forge the ultimate team for an epic co-op action. Immortalize your achievements by posing with custom comic covers.

THE ULTIMATE MASHUP
Spanning the far reaches of space and time, the new Masters of Evil converge and strike, presenting dynamic challenges and testing your team with each play through.

TONS OF UNLOCKABLES
Heroes earn many rewards — prove yourself on the battlefield and unlock new content, surprises, and more!


Thanks to Maichy for submitting this game to the site