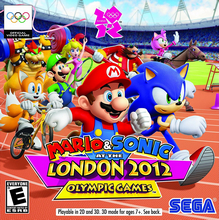 “Join Mario & Sonic in the world’s greatest sporting competition. With over 50 events on Nintendo 3DS to compete in, the Olympic Games have never been so much fun!

Original Olympic themed events will bring a whole new dimension to the Mario & Sonic universe, with the glasses-free 3D visuals and the unique control systems that offer plenty of new and exciting ways to compete for a coveted gold medal.

All this is sure to ignite even more fierce competition between friends & family in both single & multiplayer modes!“