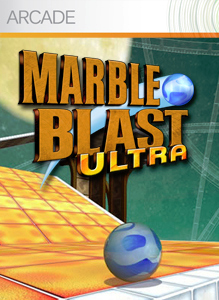 Marble Blast Ultra was delisted on Xbox 360 on February 12th, 2011. The game was created by GarageGames and built in their own Torque Engine, but when the studio became a subsidiary of Graham Software Development they were unable to retain the rights to Marble Blast from the property owner, InstantAction Holdings.

In a post about the game’s delisting on Joystiq, “GarageGames CEO Eric Preisz said that it was “unlikely” that the studio would reacquire the rights to its games.” In a GarageGames blog post in October of 2014, Preisz reiterated the point, stating “I still get e-mails every week about Marble Blast and I continue to inform folks that we no longer own the rights.”

“Marble Blast Ultra is the latest in the classic Marble Blast series. Get ready for an arcade action masterpiece with stay-up-all-night gameplay and an insane level of visual polish.

Suitable for players of any age, Marble Blast Ultra transports you to a futuristic ‘astrolab’ arena suspended high in the clouds. Compete against each other by navigating your marbles through moving platforms and dangerous hazards, while collecting rare gems and power-up enhancements, in an effort to complete each course in record time. Compete head to head in Xbox Live® ultra blast multiplayer mode!“