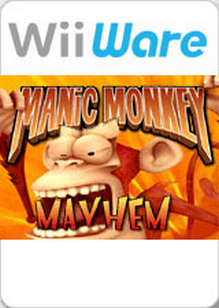 Manic Monkey Mayhem may have been delisted as early as February of 2011 after developer, The Code Monkeys, announced they had “ceased trading” on February 1st. Alternatively, it may have been available as late as 2014. The game was included in the Nintendo Wi-Fi Connection service discontinuation announcement and could have been available to buy up to that point on May 20, 2014.

“Battle up to 7 apes across 8 worlds, play solo or multiplayer. Do battle with up to 7 other monkeys across 8 themed worlds.

In single player, battle progressive campaigns or have combat against the clock, as a team or in a deathmatch.

Connect extra Wii Remotes and battle up to 3 players or compete with your friends or anyone over the Nintendo Wi-Fi Connection.

Connect a Wii Balance Board to add more manic fun.