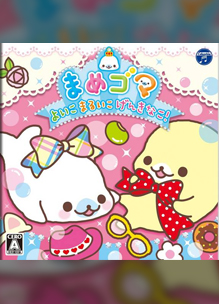 Mamegoma: Yoi Ko Marui Ko Genki na Ko and Mamegoma Happy! Sweets Farm were both delisted from the Nintendo 3DS eShop in Japan on September 25th, 2019. The delistings were likely caused by expired licensing of the San-X character. Several other licensed titles from Nippon Columbia were also delisted on the same day.

● Let’s grow to good this energetic
A snack or Nadenade the Mamegoma while the care is raised, it continues to exercise the ability, together with participation to the competition (game) tournament, let’s aim to champion!

● Trying born an excellent baby!
Once you grew up in respectable adults, Let’s make a match and give birth to a cute baby! The hair color and pattern of the baby will change depending on the combination of parents, so you can enjoy giving birth to various types of Mamegoma (75 types in total).