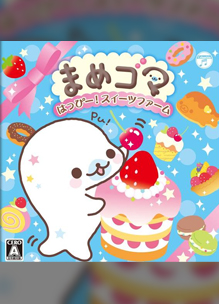 Mamegoma: Yoi Ko Marui Ko Genki na Ko and Mamegoma Happy! Sweets Farm were both delisted from the Nintendo 3DS eShop in Japan on September 25th, 2019. The delistings were likely caused by expired licensing of the San-X character. Several other licensed titles from Nippon Columbia were also delisted on the same day.

The stage of the game is Mamegoma “Sweets Kingdom” where we live leisurely. This peaceful country is in a big pinch with mischief of mischievous demons! Players become patissier Mamegoma and cooperate in making sweets that are good at Dojikko Angel Mamegoma who can no longer use magic I will do my best to restore the peace of the kingdom!

● Collect! Make! Funny everyday!
To save the kingdom, it is necessary to revive the magical power lost by Mamegoma. To do that, you have to make sweets and collect everyone’s smiles = smile hearts. Let’s collect ingredients by walking around the field or growing in the field! If you make special sweets, “Smile Hearts” will gather!

● Lots of fun elements!
Jewels collected in the field You can enjoy various fashions by exchanging with accessories! You can also make cute deco photos with AR cards!