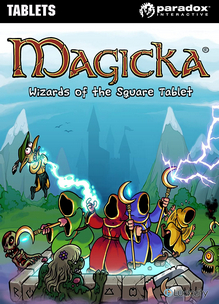 Magicka: Wizards of the Square Tablet was removed from sale on Steam on October 1st, 2018. The game was removed and its online features eventually shut down in reaction to the General Data Protection Regulation (GDPR) that went into effect in May of 2018. Paradox announced the decision and their plans on the game’s official forums on October 15th, 2018:

Today is the sad day that we must tell you that Magicka Wizards of the Square Tablet is being shut down. With the changes to GDPR, a set of policies and regulations that even the wisest of Wizards must adhere to, we sadly need to disenchant and deactivate the Square Tablet.

This game is not compliant with the General Data Protection Regulation and will be brought down from all distributions platforms. This means that by December 3rd, 2018, owners of Magicka Wizards of the Square Tablet will see degradation of services and availability of the game’s features as we discontinue support on it.

Thank you for your understanding through this process, and as always thank you for supporting the game and our efforts!

Magicka: Wizards of the Square Tablet may have remained available to purchase from Desura until that service was shut down in 2016. The game has also been delisted on iOS and Android platforms.

“The once wandering wizards have found their way back home in Magicka – Wizards of the Square Tablet, now available for PC. Experience the mobile hit on your squarish and almost certainly, stationary monitor. But fret not, if any wizards still happen to be wandering you can still accidently kill them with cross platform support across all devices.

From the publisher that brought you Magicka, it’s more Magicka! Wizards of the Square Tablet features the innovative and dynamic spell casting system from the original PC hit. Experience a brand new campaign set prior to the original tale of Magicka.

Adventure through the new campaign by yourself, or “accidentally” obliterate your friends in multiplayer co-op, which supports up to four players! Play together with fellow mages across multiple platforms, which may co-exist in the same game session thanks to a twisted union made possible by dark sorcery!

Cast your spells across multiple levels, and unlock new powers unique to Magicka – Wizards of the Square Tablet. Experience the humor and chaos of this satirical fantasy world.“