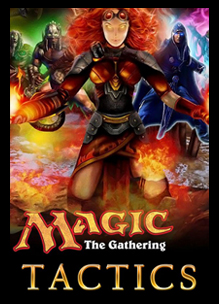 On October 18th, 2013 Sony Online Entertainment announced in a blog post that Magic: The Gathering – Tactics would be shut down on March 28th, 2014. A follow-up forum post confirmed that the sale of in-game items would end on November 18th, 2013 and that due to licensing from Wizards of the Coast, no community-driven efforts to maintain the game would be possible. The initial blog post follows:

Today we are announcing with our partner, Wizards of the Coast, that we will discontinue game services for Magic: The Gathering – Tactics on March 28, 2014. We are honored to have been a part of bringing you the magic of the Multiverse over the last few years. It has been a fun and memorable journey, and we thank you for all of your dedication and support.

The decision to shut the game down seems to be related to its lack of players and underwhelming response but could also have been an early sign of SOE’s 2015 transition into Daybreak Game Company. You can read more about this transition on some of the affected game pages on the site.

Magic: The Gathering – Tactics is being developed by SOE’s Denver studio and scheduled to be available for the PC in early 2010, with a version for the PlayStation®3 computer entertainment system to follow.