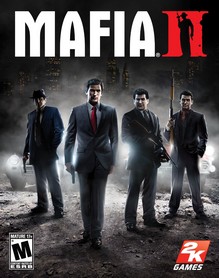 Mafia II was delisted from Steam on August 22nd, 2015 and from Xbox 360 and PlayStation 3 around the same time. The last active Archive.org capture shows it was available for Xbox 360 on July 30th and removed by August 26th, 2015. Support forums begin questioning the game and it’s DLC availability on August 15th (Xbox) and September 3rd (PlayStation). The Steam version was put on sale the week before it was delisted and the Xbox 360 version was offered as a Games with Gold “freebie” just a few months before in May. The likely cause for the delisting is expired music licensing. A list of songs as they appeared on the original game’s music credit page, and have since been removed from the game, is provided below.

The game and DLC reappeared on Steam nine months after the previous delisting on June 1st, 2016. On August 30th, 2016 the official Mafia homepage announced that Mafia II was once again available for digital purchase on Xbox 360 and PlayStation 3. Slightly delayed, the Xbox 360 version would return between September 16th and 22nd, 2016. The game eventually made its debut on the GOG.com platform on March 30th, 2018.

No official changelog was released but users on Steam confirmed that several songs were removed from the game. This indicates another music license expiration which is also what forced the original Mafia game to be removed from Steam (relisted in November 2017). The tracks confirmed as removed are not from any one individual label or publishing company although many of them are credited to Sony Music Licensing or EMI.

“There’ll Be a Hot Time in the Town of Berlin” – Andrews Sisters, The
Courtesy of Hasmick International Limited
Published by Barton Music Corp.
“Ain’t that a kick in the head” – Dean Martin
Courtesy of Capitol Records
Under license from EMI Film & Television Music
Published by Maraville Music Corp.

“I Put a Spell on You” – Screamin’ Jay Hawkins
Courtesy of Epic Records
By arrangement with Sony Music Licensing
Published by EMI Unart Catalog Inc. (BMI)

From the developers of the award-winning Mafia comes Mafia II, a beautifully crafted look into the dark and unforgiving world of the Mob. Expanding upon the original hit that captivated more than 2 million gamers around the world, 2K Czech takes players deeper into the Mafia with a mature and exciting experience that will immerse players like never before.

Powered by 2K Czech’s next-generation engine built specifically for Mafia II, players will experience the true evolution of the Mob game that defined a genre. Gunfights, hand-to-hand combat and vehicular exploration feature new depth and dimension that allow players to experience the world of Mafia II in a way that will keep them coming back for more.