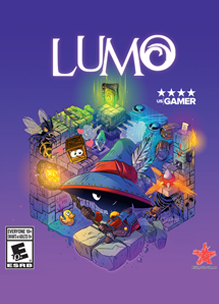 Lumo was delisted on PlayStation 4, PlayStation Vita, and Xbox One in all Western territories no later than July 19th, 2020. According to Google Cache archives, the game was last confirmed to be available on these consoles between July 6th and 9th. By July 17th the Steam publishing rights had changed hands from Rising Star Games to Triple Eh? Ltd.

Possibly as early as August of 2020 Lumo was delisted on Nintendo Switch in Japan where it was published by Rising Star Games. By August 27th, 2020 Thalamus Digital confirmed that they had become the new publisher of the game on Switch in all other territories. It is uncertain if the game was delisted for any period of time on Nintendo Switch while the publishing rights changed hands.

From July 2020 the PlayStation Vita versions of the game remain available exclusively in Asian and Japanese territories where Rising Star Games is still listed as the publisher. On April 5th, 2022 Thalamus Digital announced that they had brought Lumo back to PlayStation 4 in Australian, European, and North American territories.

Witness the rebirth of a genre in Lumo – a classic isometric adventure with a modern twist for gamers young and old alike! As a contemporary take on the long-lost isometric platform genre, Lumo can be enjoyed by anyone looking for an absorbing, challenging and rewarding adventure. But for those who lived through the golden age of videogames – the 80s and early 90s – or know about the games and culture from that time, layer upon layer of nods, winks and touches to those times help build upon an experience that’s as heart-warming as it is exciting!

Thanks to irishnerd47 for submitting this game to the site