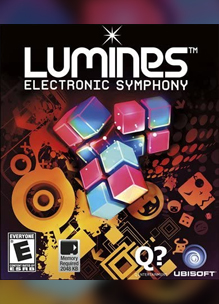 Lumines Electronic Symphony was delisted from the PlayStation Vita no later than July of 2017. This timeframe coincides with the regional delisting of Lumines Supernova on PlayStation 3 and precedes the early 2018 announcement of Lumines Remastered from Enhance Inc. (founded by Lumines creator Tetsuya Mizuguchi).

Ownership of the Lumines franchise apparently changed hands leading up to the release of Lumines Remastered and likely caused these delistings. Lumines was also delisted from Steam but not until days before the remastered release in 2018.

“The king of music-puzzle games returns with its first, all-new installment in over 5 years. Lumines™ Electronic Symphony marks the return of Q Entertainment’s landmark puzzle series, bringing together addictive block-dropping puzzle action, an all-new 3D graphics engine, and some of the most significant names in electronic music history.

Star-studded musical line-up: Featuring some of the best and brightest names in electronic music, the soundtrack for Lumines™ Electronic Symphony is a diverse selection of known artists as well as original tracks composed by Q Entertainment’s sound team, providing the ultimate aural experience. Look for tracks from The Chemical Brothers, Mark Ronson, Underworld, LCD Soundsystem, and more!

All-new EXP system: Lumines™ Electronic Symphony rewards player effort and investment by providing an in-depth player profile, deep stat tracking, and a new Experience Points system that rewards every player’s play style with a level-based reward system. The more you play –whether in solo or versus play— the richer your Lumines experience will be.

Social experience: Compare your progress against your friends! Every time you play Lumines™ Electronic Symphony –whether in single- or multi-player modes– you earn experience points. Another level, another rank, or another reward is always within reach. Whether you’re a new Lumines player or a veteran of the series, Lumines™ Electronic Symphony’s new social features will encourage you to play just “one more game.“

Thanks to Irishnerd47 for submitting this game to the site