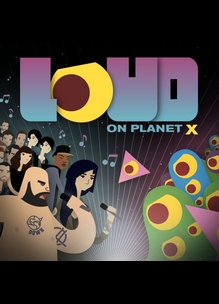 LOUD on Planet X was initially delisted from the PlayStation 4 in Japan on March 15th, 2018 according to discussion on PSNProfiles forums. Japanese publisher CrossFunction cited only “various reasons” for the game’s delisting. The short window of availability suggests that some of the game’s music licensing may not have been completely cleared for release in Japan.

The Pop Sandbox team announced on April 16th, 2020 that LOUD on Planet X had been delisted from Steam as they were unable to renew all of the licensed music in the game. The North American PlayStation 4 version of the game was delisted on or shortly after this date. The team’s announcement follows:

The encore set has been played and the final blaster discharge’s ionized smoke trail is fading in the air. LOUD on Planet X has played its last gig.

We’ve had three years of great rhythm blasting action, but we are unfortunately unable to renew all the music rights going forward. If you own this game, we thank you for your support, and you’ll be able to continue playing it as long as your operating system supports it. We won’t be able to provide any additional maintenance or fixes from the point going forward.

If you have any further questions, please e-mail us at [email protected] behalf of the whole entire LOUD on Planet X team, we had a blast rocking the galaxy with you! Thank you!

Choose from a cross-section of top current indie music artists, then defend your stage from hordes of quirky aliens by tapping to the music and using a fun assortment of makeshift weapons like speakers, strobe lights, fog machines, amplifiers, bouncers and custom special attacks!

LOUD on Planet X is an exciting new indie alternative to Rock Band or Guitar Hero with a splash of Plants vs Zombies – a new hybrid of rhythm game and classic shooter with tower defence elements.