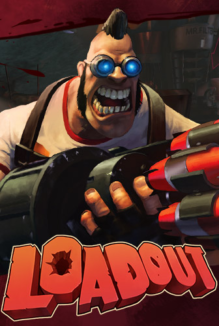 Loadout was removed from sale on Steam and PlayStation 4 on May 10th, 2018 and its online services shut down on May 24th, 2018. On May 7th, Edge of Reality CEO Rob Cohen announced the news in a farewell post on the game’s Steam Community forum. The announcement follows:

Thanks to everyone who made Loadout possible!

I hear from fans who passionately love Loadout every day. It started when we began closed beta in back in 2012, and it never stopped. Over 9 million people have played Loadout since then! There was never any question that Loadout was special. I’m deeply grateful to all you players who contributed your time, energy, creativity, and feedback. You’re the main reason I wish Loadout could live on. Maybe someday Loadout will return, but for now, it will go offline on 5/24/2018.

An incredible amount of talent, passion, and hard work went into Loadout. I’m still awed by your work! This includes everyone at Edge of Reality. Practically everyone at EOR contributed to Loadout in one way or another, whether directly or indirectly, and everyone deserves to share in the credit for what we accomplished. I still cheer for your many continued successes in work and life after EOR.

Our Friends at Playfab, Steam, and PlayStation

Thanks for all your help!

Why now?
Loadout just received a few death blows. Any one of these could have been fatal, but with all of them hitting at once, it’s clear that we have no choice but to shut it down.

Cloud end of service
Loadout depends on an old product from our main cloud provider, and that product is also ending service. I can’t speak for them, but GDPR may also be a factor. Porting Loadout to use their new product is a major undertaking, and we don’t have the resources to do that.

Rising costs
Other cloud products recently getting discontinued are resulting in much higher server costs, while Loadout’s revenues stay flat. This just put Loadout deep into the red, losing an alarming amount of money per month.

So, enjoy your last moments of Loadout, and record them for posterity!

Until next time,
Rob

Since the announcement and the end of service for Loadout, it appears Edge of Reality has also shut down. The studio’s website is now offline and Archive.org captures show it was last active in June of 2018. The studio’s Wikipedia page lists their status as “defunct” as of 2017, though they were clearly still supporting (and possibly developing) Loadout through this period.

In late March 2019, site contributor FallenRyan provided an update on the game’s status on PlayStation 4.  The game remained available at full price exclusively in the Hong Kong territory until July 1st, 2020. One day prior, Asian publisher CEAsia announced their plans to shut down the game on Twitter.

We are sad to announce that the Loadout Premium PS4 servers will be permanently shut down on September 26th, 2020, at 00:00am UTC. From then on, players will no longer be able to log in the game. To avoid any misunderstandings, Loadout Premium and all related items will be removed from the PlayStation Store on July 1, 2020, at 00:00 AM UTC.

We want to give you our most sincere thanks for your long-term support for Loadout Premium on PS4. We feel blessed and humbled by our incredible community, and we look forward to meeting you again in future games. We want to apologize for any troubles caused for this shut down. We will work hard to keep creating and releasing great games that bring you even more engaging experiences.

Our robust and modular Weaponcrafting system allows players to make their own weapons from a wide variety of weapon parts, and then modify their entire arsenal to suit their play style. There are no defined classes in Loadout. You define your own class through the weapons you create.

Loadout is also loaded with over-the-top comedic violence, stylish character models, and crazy player animations. We aim to add a fresh, new look to the shooter experience that gives players a full-adrenaline rush that is totally different from the vast array of modern combat titles. From our hilariously gory damage system, to our wacky character customizations, Loadout will appeal to the lunatic in us all. But don’t let the demented humor fool you. At its core, Loadout is a skill-based shooter that’s easy to learn, but hard to master.

Most importantly, we are 100% dedicated to adding more content to Loadout such as new weapon parts, maps, game modes, and much more. We base many of these decisions from community feedback, so join our forums at http://community.us.playstation.com/t5/Loadout-Forums/ct-p/69843 to be a part of the discussion and join your friends in some crazy, competitive gameplay!“