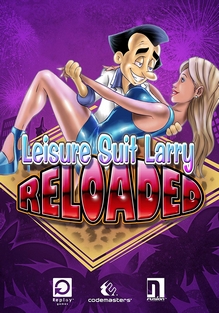 Leisure Suit Larry: Reloaded was delisted from Steam on November 24th, 2017 when its price was set to $0.00. The game’s page remains accessible but it cannot be purchased through Steam. Shortly after its release in 2013 news broke that Leisure Suit Larry creator, Al Lowe, parted ways with the publisher of Reloaded, Replay Games. Replay Games president Paul Trowe had recently pleaded guilty to showing explicit material to a minor and Polygon found a string of similar convictions from years past.

Despite this controversy, the game’s delisting nearly five years after release is most likely due to expired licensing from Codemasters who reportedly owns the intellectual property rights to the franchise. Leisure Suit Larry: Reloaded is currently available to buy on GOG.com and the original DOS versions are also available on Steam and GOG. Download codes for PC, Mac, and Steam are also available from Amazon.com as of this writing.

“Leisure Suit Larry is one of the most iconic characters in the history of computer gaming. The first game in the series, Leisure Suit Larry in the Land of the Lounge Lizards, was published in 1987 and helped build the Sierra OnLine dynasty. Featured in a score of original software titles since then (not counting numerous anthologies and cameo appearances), the series’ hero, Larry Laffer, is a bumbling, persistent everyman who just wants to be loved. Is that so wrong?

From original designer Al Lowe (designer of all of Larry’s classic adventures) and writer Josh Mandel, Replay Games is remaking the landmark first game for a new generation. Expanded and enhanced in every detail and ready to rock your PCs. Leisure Suit Larry: Reloaded is being reborn for those of you who might’ve seen your parents (or grandparents!) playing Larry behind closed doors.“