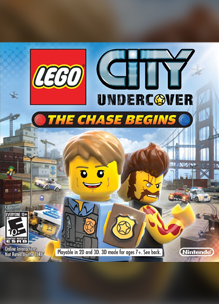 LEGO City Undercover for the Nintendo Wii U and LEGO City Undercover: The Chase Begins for Nintendo 3DS were both delisted worldwide on December 22nd, 2020. The game pages on Nintendo’s sites and a Nintendo Support page were updated with the following notification:

Both titles were published by Nintendo and appear to have been timed exclusives. In the case of LEGO City Undercover, Warner Bros. Interactive would not announce plans to bring the game to other platforms until 2016. LEGO City Undercover: The Chase Begins was not brought to any other platform. It would appear that Nintendo’s exclusive publishing rights for these releases expired and Warner Bros. Interactive did not seek to renew their listings.

Step into the shoes of Chase McCain as he arrives in the up-and-coming LEGO® City, earning his keep as a rookie officer. This prequel to LEGO® City Undercover on Wii U reveals the origin story of Chase McCain, one of the city’s most celebrated crime fighters.

Drive fast, go undercover, and make the arrest! Use disguises to gain special abilities, and engage in hand-to-hand combat with the underground criminal element. Drive dozens of vehicles around the city to tackle missions and explore the massive LEGO® City.