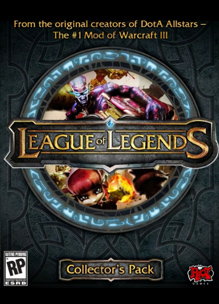 League of Legends: Clash of Fates was delisted on Steam shortly after its debut on the platform, some time in late January of 2010. Eager to avoid Valve taking a percentage of their in-game purchases, and to distinguish League from Valve’s rival title, Dota 2, Riot removed the game from Steam.

Since the game remains in Steam’s database, occasional automated updates to the platform will resurface the League of Legends entry, as it did in May of 2014. At that time PCGamesN and other blogs initially reported that League may be coming back to Steam but a statement from Riot promptly settled the debate.

For a brief period of time after League of Legends launched in 2009, players could purchase a digital collectors edition of the game. This was distributed through a variety of channels (Steam included) via our European partners. We ended those distribution arrangements in 2010, but a small number of players still have this version of the game in their inventories, so that’s why it occasionally pops up. There are no plans to change our current distribution model of providing League of Legends direct via signup.leagueoflegends.com.

Players who still own League on Steam are likely unable to play the game nowadays, as evidenced by the single-digit concurrent player charts on SteamDB.