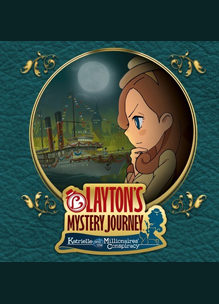 Layton’s Mystery Journey: Katrielle and the Millionaires’ Conspiracy was likely delisted on Nintendo 3DS in North America in February of 2021. This is when the game’s availability was first brought into question but it could have been delisted earlier. Although the port of the game on Nintendo Switch has been available since 2019 it is still possible that Nintendo of America chose to delist the 3DS version to incentivize purchases of the newer release. As of this writing the game remains available digitally on 3DS in Europe and Japan with some download codes for the North American version still available.

Join Katrielle Layton, our new hero, as she becomes embroiled in a casual, quizzical quest, which has its roots in our hero’s search for her missing father, Professor Hershel Layton. You’ll be whisked around London’s famous landmarks, from the Houses of Parliament to Tower Bridge, following Kat, solving case after unlikely case, until she unwittingly uncovers the Millionaires’ Conspiracy.

The story begins with Katrielle setting up the Layton Detective Agency, determined to prove her worth and hoping the exposure will uncover clues about the missing professor’s whereabouts. Help Kat discover clues, solve mysteries and original puzzles! Fashion-conscious players can also redecorate the agency and dress Katrielle in various outfits to suit the case at hand. With the most puzzles ever included in a Layton game, a colorful new cast, and an intriguing storyline that includes seven millionaires and one whopper of a conspiracy, will she ever be able to find her missing father?

Thanks to Alex Scalero for submitting this game to the site