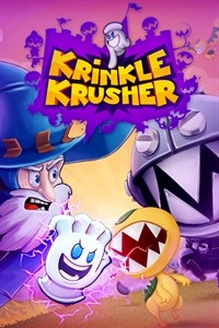 Krinkle Krusher was confirmed to have been relisted on PlayStation 4 in North America no later than December 12th, 2021 by site reader HandMaskTar. It is likely that the game returned earlier than this date but no other confirmation could be found as of this update.

Krinkle Krusher was delisted from Xbox One no later than December 16th, 2016 according to the earliest forum posts found on TrueAchievements.com. The game was likely delisted around this time on PlayStation 3, 4, and Vita in North America only. The delisting looks to be related to Ilusis Interactive Graphics’ standing as the game’s publisher. All versions published by Illusis themselves have been delisted while versions published by Funbox Media (and formerly KISS Ltd) remain available as of this writing.

Krinkle Krusher is an action castle defense where you cast elemental spells to defend your kingdom from the twisted and hungry creatures called Krinkles. After several generations of peace, they happen to come back exactly when the Ancient Tree bears its first fruits in centuries… and of course a cake was made from it.

SPELLCASTING STRATEGIC ACTION!
Freeze, burn, zap them all! Cast spells to defend your castle! Use the power of fire wall, ice crown, mud, energy mine, thunder and tornado.

Hit the various Krinkles weaknesses and combine your powers to keep them away. Upgrade your spells and castle to face the bigger Krinkle hordes and the bosses!