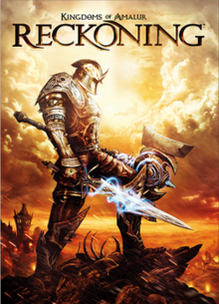 The game was clearly delisted ahead of the HD remake, Kingdoms of Amalur: Re-Reckoning which was released in September of 2020. As the game was originally published by Electronic Arts before the Amalur property was acquired by THQ Nordic, the original game is likely not allowed to coexist alongside the current releases.

Immerse yourself in an all-new massive universe from the minds of bestselling author R.A. Salvatore, world-renowned artist Todd McFarlane, and legendary game designer Ken Rolston. Choose your path and battle through a sprawling master-crafted world featuring some of the most intense, responsive, and customizable RPG combat ever.

Purchase or use of this item is subject to the PlayStation®Network Terms of Service and User Agreement and this item’s use restrictions. This item has been sublicensed to you by Sony Computer Entertainment America. One-time license fee for downloads to up to 2 console systems that are associated with the purchasing account.