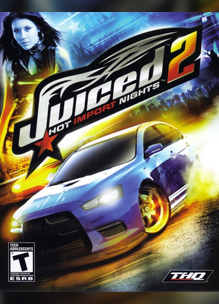 Juiced 2: Hot Import Nights appears to have been delisted on a variety of platforms between 2011 and 2015. The delistings are either due to expired licensing of the cars featured in the game, the Hot Import Nights brand, or the bankruptcy and liquidation of THQ’s assets between late 2012 and into 2013.

Based on Archive.org captures, Juiced 2 appears to have been delisted on Steam between April and June of 2011. On PC it was at risk if not completely unavailable by August 22nd, 2013 when Microsoft retired the Games For Windows — LIVE service. The Xbox 360 Games on Demand version was last confirmed available in August of 2010 and delisted by January of 2015. It is uncertain when the PlayStation Portable version disappeared but it seems likely that it was delisted alongside the other releases between 2011 and 2013.

Get into the drift with Juiced 2: HIN – the only place where superstar DJs, smokin’ hot models and totally tuned cars come into close contact. Juice up your ride with complete customization and boost your NOS power as you draft, drift, slide, spook and fight for your rightful place on the racing line. Fast-paced, adrenaline-fuelled, pick-up-and-play action lets you enjoy the pure rush of powersliding your way around the globe. Wow the crowd, keep tabs on your opponents and take the crown as the rightful king of drift!