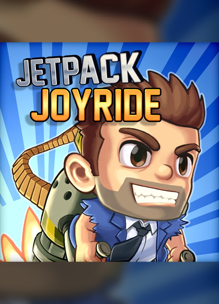 Jetpack Joyride FREE was likely delisted on PlayStation 3 and PlayStation Vita in November of 2014 ahead of the for-pay release of Jetpack Joyride Deluxe. If the FREE release did remain available after 2014 it was then confirmed to have been delisted by April of 2016 based on PSNProfiles forum discussions. An anonymous submission to the site claimed that the FREE release was still available in North America up to November of 2020 but we could not find it on the PlayStation Store, neither from a browser or directly on the consoles.

Although Jetpack Joyride FREE is no longer available, various versions of the game remain for PlayStation 3, PlayStation Portable, PlayStation Vita, and PlayStation 4, as well as on mobile devices.

Down on his luck as a struggling gramophone salesman, Barry Steakfries comes across the “secret” laboratory of Legitimate Research, a corporation dedicated to developing crazy new technologies. Seizing the chance to become a hero, Barry begins his ride after commandeering a jetpack and making good his escape, where the player jumps in and guides his adventure with accessible one-button gameplay.

Along the way, players must avoid lasers, missiles and electro zappers, all the while grabbing coins and trying out even more ridiculous vehicles – Lil’ Stomper, Profit Bird and the robot dragon himself, Mr. Cuddles! Supporting the action is a robust Stash system, where everyone can track their progress, upgrade their gear and buy new gadgets for Barry. Grab one of many jetpacks including the classic Machine Gun Jetpack or the colorful Rainbow, suit up in a vast wardrobe of unique costumes and make sure Barry’s best friend Flash comes along for the ride!