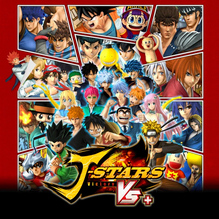 J-Stars Victory Vs+ was presumably delisted from the PlayStation Store worldwide for PlayStation 3, PlayStation 4, and PlayStation Vita in 2018. In North America it was last on sale through the Play Anime promotion in February of 2017 while in Europe it was offered as part of the Games Under €20 sale in January of 2018. It is possible the game was delisted in North America in 2017. We have only found anecdotal forum posts from March of 2017 indicating that the game was still on sale, but nothing more recent.

However, as the game was released at the same time in all territories it is likely the delisting also took place simultaneously: at some point after the European sale in January of 2018. We did not receive confirmation that the game was delisted until March 30th, 2018 when reader T87 submitted it to the site. J-Stars Victory, the Japan-exclusive predecessor has also been delisted on PlayStation 3 and PlayStation Vita in that territory.

In all cases, the delisting is likely due to expired licensing from the copyright holders behind the game’s dozens of featured anime and manga properties. J-Stars Victory Vs+ remains available physically on all platforms it was released on except for the Vita in North America where it was only released digitally.

“Who is the strongest team amongst the legendary Jump characters? Find out in J-STARS Victory VS+, featuring over 50 characters from 32 different manga series from WEEKLY SHONEN JUMP. Progress through the JUMP World featuring environments recalling NARUTO™, DRAGON BALL Z®, ONE PIECE and other memorable locations and moments.

Enjoy a grand adventure as your favorite heroes and fight in local and online 2-on-2 versus battles or test your skills in Arcade Mode. Strategically use combination attacks and unleash ultimate attacks using the Voltage Gauge system to best your opponent. It’s the ultimate dream for every anime fan!“

Thanks to  T87 for submitting this game to the site.