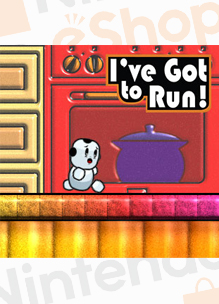 At this time the date that I’ve Got to Run! was delisted is uncertain but may have taken place between 2018 and 2019. This timeframe marks a known period where several independently published releases were being removed from the Wii U, allegedly because Nintendo of America was no longer renewing their developer/publisher licenses.

4 Corner Games also announced in this period that they were pausing their efforts as an independent developer and publisher. Although not exactly the same game, I’ve Got to Run: Complete Edition! remains available on the Nintendo 3DS eShop.

Join Roy the Marshmallow Boy as you run forever! I’ve Got to Run! is an endless runner game where you never stop running and only have to jump correctly – it’s trickier than you might think! Run through three modes – Endless Classic, Endless Double, and Endless Special, as you try to set a high score in each. When you’re done, post your high score to Miiverse and let all of your friends see! This arcadey game is a blast!