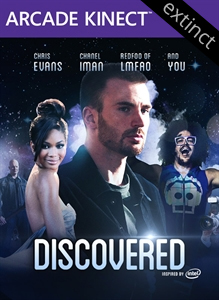 Intel Discovered was the flagship component of the “Discovered” ad campaign created for Intel by ad agency Amusement Park Entertainment. The campaign also featured a documentary web series, mobile apps and links posted by the starring celebrities on Facebook and Twitter. The ad campaign ended around May of 2013 and the free game was delisted no later than July 2nd, 2014. As of May 2016 it is still available to those who previously downloaded it through their Purchase History page.

The AdAge article about the campaign offers some interesting insights into the production of the game by longtime Xbox developer Wahoo (also known as NinjaBee):

“[The FMV] aspect was very new and seemingly insane,” said Wahoo President Steve Taylor. “Especially at the actual shoots. These were serious film sets with full crew, tons of equipment, video village, movie stars, the whole package. I kept asking what I’m sure were incredibly naive questions about filming and post-processing. Of course, most of the film people had never made a video game before, either.“

“Do you have what it takes to be a superstar? Get schooled by Chris Evans on the secrets of the action hero. Get styled and learn how to work the runway with Chanel Iman. Rock the party with Redfoo of LMFAO. Live video play puts you in the action: punch, jab, kick, jump — pose, smile — surf the crowd. Pass these celebrity tests and you’ll be slated for stardom. Share the custom movie poster of you and Evans, and your magazine cover shot, with your friends.”