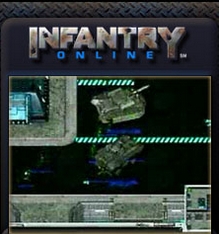 Infantry Online was shut down on March 29th, 2012. The team announced the shutdown of this and several SOE titles one month earlier:

Even before being shut down, the Infantry community was collecting and creating content for the game outside of its official site and servers. After the shut down the game was re-launched by the community at freeinfantry.com and is still available to play today.

“Team with gamers from around the world in this adrenaline-pumping collection of online combat games. It’s all-out frenetic action in the world of Infantry where battles featuring up to 100+ wage throughout the day. Easy to play and simple to get into, Infantry offers a quick blend of tactics and action unlike any other massively multiplayer online game.

Best of all, when you create a Station Account with Sony Online Entertainment, you can access portions of Infantry without paying a subscription fee by downloading the Station LaunchPad. No credit card needed! Enlist now, soldier!“