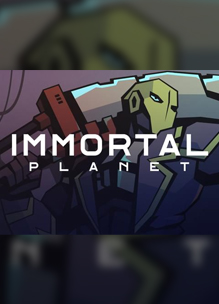 Immortal Planet was delisted from GOG.com on January 11th, 2021 at 2pm UTC after a brief advanced notice was posted on January 5th. No reason for the delisting was given but as it is teedoubleuGAMES’ only release on GOG.com it would seem to no longer be worth the time, energy, and/or expense to keep it available. As of this writing Immortal Planet remains available on Steam.

On the icy surface of a forgotten planet stand ruined tombs where immortals sleep. While sleepless warriors roam the halls with their minds eroded by eternity, a lone Awakewalker emerges from cryosleep. With no memory of their past, it’s up to them to forge their future, discover the planet’s mysteries, and find a way out of this icy hell.

Fight against challenging enemies with complex behaviours while exploring levels built around single checkpoints. Gather Experiences from fallen enemies to upgrade your character. Fight and die repeatedly, but never lose progress by recovering Experiences lost upon death. Explore the world to discover the story and find many items, spells and weapons that will give you an edge against demanding boss enemies.