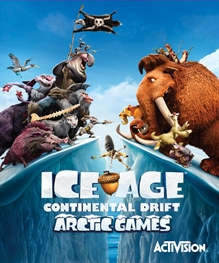 Ice Age: Continental Drift: Arctic Games was delisted from Steam on January 2nd, 2015. The last Archive.org capture shows it available on Xbox 360 on December 8th, 2014 and delisted by February 17th, 2015. The downloadable PlayStation 3 version was only available in Europe and likely delisted around this time.

Ice Age: Continental Drift: Arctic Games remains available on physical media in Europe on PlayStation 3 and PC, and in the US on Xbox 360. Steam codes are available on Amazon as of July 2017.

Activision’s license to both Family Guy and Ice Age through Twentieth Century Fox Consumer Products was announced in the Spring of 2012. Just two years later both products were delisted from digital storefronts very near to one another; Family Guy in December of 2014 and Ice Age in January of 2015.

Activision may have chosen to delist the games as they both received below average Metacritic scores. It’s also possible a three-year licensing deal was secured as early as 2011 and after delays the games were rushed to a late release in 2012 leading to what looks like the premature delisting.

“Team up with your favorite Ice Age characters in a continental competition of glacial proportions! Battle for treasure with the Herd and the Pirates in their craziest adventure yet!

When their island is set adrift in the midst of continental upheaval, Manny and the herd encounter a ragtag menagerie of seafaring pirates with a secret treasure.  Having trouble deciding on how to split the treasure evenly, they collectively decide to settle the problem through a series of off-the-wall sporting events including ski jumping, ice smashing, and glacial hopping.  Ultimately, the winner of the most events will be entitled to the prize.  As the prehistoric games begin, players must side with Manny and the herd, or the seafaring pirates to determine the fate of the riches.“