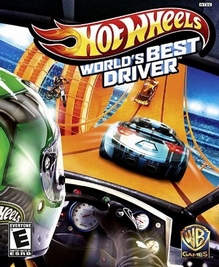 “Gear up for the most intense challenges only Hot Wheels® can deliver! Pick your team, choose your ride and go for it! Get behind the wheel of thrilling Hot Wheels vehicles while joining the elite ranks of Team Hot Wheels™. Compete in dozens of unique, fast-paced, re-playable challenges all highlighting the different driving styles of Team Hot Wheels: the speed record-breaking Green Team, the show-stopping stunts of the Red Team, the high-tech precision of the Blue Team and the world record-breaking jumps of the Yellow Team. Do you have what it takes to be the World’s Best Driver?“