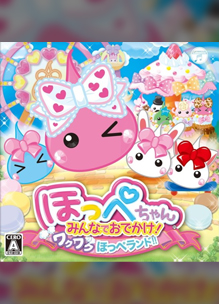 Hoppechan Minna de Odekake! Wakuwaku Hoppe Land!! was delisted from the Nintendo 3DS eShop in Japan on September 25th, 2019. The delisting was likely caused by expired licensing from SUNHOSEKI. Several other licensed titles from Nippon Columbia were also delisted on the same day.

Google Translation:
Cute “Hoppe-chan” game The second release! Let’s make your own cheeks and play on the stage of the cheeks’ theme park “Cheks Land”. There are 22 fun attractions in the land! All attractions support local play with friends and can be played by up to 4 people.

● Power-ups for making cheeks!
All-you-can-make cheeks at Hoppe Land ! With the introduction of a new “special squeezer”, you can now make cheeks that shine at night and metallic cheeks. 300 new deco items have been added to decorate the cheeks! Special deco items that move and shine have also been added.

● Let’s enjoy the cheek land!
Move around the land with the cheek you made. You can take a commemorative photo, ride a skateboard, play tag, and do various things.

● cheeks land spread rapidly
and earn happiness power “Lung” of the cheek-chan to play the attraction, cheeks land will continue to become bigger and bigger. New areas and facilities are opening one after another! As you progress through the game, you will be able to play in Hoppe Land at night.