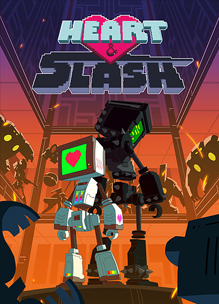 Heart&Slash has been delisted on PlayStation 4 and Xbox One in Japan. The timing and cause for this specific territorial delisting is uncertain. The game was confirmed to be delisted by February 15th, 2021 when it was submitted to the site but we have found no earlier evidence of its removal.

The game remains available in all other territories and on all other platforms where it was released. Other titles published by Badland Publishing and H2 Interactive (the Japanese publisher on PlayStation 4) remain available, ruling out a broader issue with either company. Neither publisher features the game on their websites but given its age this may be inconsequential. The delisting could possibly be related to a change in the game’s CERO content rating but, again, given its age and cartoonish visuals, this seems unlikely.

Heart&Slash is a 3D brawler roguelike robot love story set in a world where machines are all that remains from human civilization. You play as Heart, a sentient robot fighting to escape the grip of the evil and all seeing machine QuAsSy (Quality Assurance Systems). But make no mistake, Heart&Slash is no walk in the park. Every death is permanent and means a new randomly generated level for you to start over with a different set of weapons and items you can use, new enemies to fight and secrets to explore. Heart&Slash offers players something new and challenging because it is not about mastering one system, rather adapting to what is provided and making the most of it.