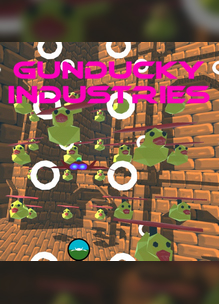 Gunducky Industries was relisted on Steam on December 29th, 2020 and on PlayStation 4 by January 8th, 2021. The original Steam forum announcement from 2018 has been removed but the game was later released for free on itch.io.  The developer commented on this release stating, “I removed it from sale because it was badly reviewed and sold terribly and I felt like I should stop charging money for it. I found out later that there was at least 1 person who really liked it so I’m putting it up free here”. It is uncertain if the relisted version has been altered or if the developer changed their opinion on the quality and chose to put it back on sale.

Developer The Voices Games announced on the game’s Steam forum on September 26th, 2018 that Gunducky Industries had been removed from sale. The brief comment from the developer explained, “I have decided to stop selling this game because it was very poorly received and I don’t feel it’s good enough to keep selling.

“Fly your plane with arcade flight simulator controls through narrow levels shooting enemy robots and dodging amongst obstacles such as trees and ancient ruins.“