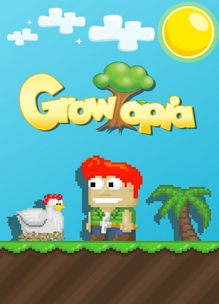 On April 27th, 2020 the Growtopia team announced on the game’s forums that the PlayStation 4, Xbox One, and Nintendo Switch versions of the game would be shut down on July 30th, 2020. These versions were released in July of 2019 and apparently did not garner a big enough audience or generate enough income from microtransaction purchases to continue support. The team’s announcement follows:

When we launched Growtopia on consoles in July, we wanted to bring the beloved features of Growtopia to PlayStation, Xbox and Switch, giving console players the opportunity to create infinite worlds and share their astounding creations with their friends online.

In January, we shared An Update about the State of Consoles and we made the decision to reduce content and support for the console version of Growtopia, in order to allocate all resources back to support the Mobile and PC version.

There is no easy way to say this, but we will be discontinuing our service for Growtopia on consoles in July to allocate all our resources to the Mobile and PC version. This decision did not come lightly, but ultimately after exploring several options, the console version of Growtopia is not sustainable.

If you are currently playing on consoles, what does this mean for you? As of today, all purchases in the in-game store are disabled. Therefore, you will no longer be able to purchase Gems. However, you still will be able to use your Gems to purchase items until the full closure of the game.

On July 30, we will be closing the servers. After July 30, you will no longer be able to log into your account. Until then, you will be able to play the game with the current level of support.

We are grateful for the community that was built around the console version of Growtopia and we are sorry to close this chapter. We thank you, Growtopians, for your continued support over the last year and hope you enjoyed the journey as much as we did. Thank you!

Growtopia was created by Seth Robinson and Mike Hommel, and originally launched as a beta on Android in 2012. On February 28th, 2017, Ubisoft announced their acquisition of Growtopia, keeping Robinson and Hommel on as advisors, and handing development to Ubisoft Abu Dhabi.

“Growtopia is a universe of unlimited worlds, all connected to each other. Create mind-bending worlds together with friends and fill them with anything your heart desires!

Collecting seeds, growing trees, harvesting and combining seeds to make new ones is the heart of the game. As universes go, Growtopia is filled with everyday heroes and some villains too. Protect your items and play with friends safely with innovative world lock system!“

Thanks to Kaizuken for submitting this game to the site