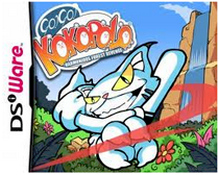 Go! Go! Kokopolo was delisted from the Nintendo DSi Shop on August 31st, 2014. In a lengthy and surprisingly open post on NeoGAF, designer/producer Keith Webb explained the delisting in detail:

“Even though my company, Tanukii Studios Ltd (basically just me at the mo 😉 ) owns all the rights to Kokopolo, the company that helped publish the game was/is called Room 4 Games ltd. They are based in Hungary, but in order for us to work together on the game, they had to set up a company over here in the UK. Their UK company was the one who had the contract with Nintendo to release the game on the European and USA DsiWare and eShop stores, so basically they are the publisher of Go! Go! Kokopolo.

After 3 years, as sales started to dwilndle to about a handful a month, it seemed a little counter-intuative for them to keep their company open only to get the revenue from the sales, whereas in actual fact, is was costing them more on the company insurance to keep it open, than they were making.

They chatted to me, and asked if it was okay to pull the game from the stores, so that they could close down their UK company, and concentrate soley on their Hungarian company which is much easier for hem, as that is where they are based.

I reckoned a nice time to take the game off the store would be on the anniversary 3 years after it was released, as I reckoned by now everyone who wanted it would likely have brought it. I emailed a few sites telling them about it just to allow anyone who didn’t have a chance to buy it before, or forgot, that they could get thier hands on it one last time.

The other thing is, although Nintendo of Europe confirmed to me that it was going to be unavailable in “all territories” after 31st August, I’m not 100% sure they included the US in that or jusy all European territories. We did request from NOA to remove it as well, but if you are in the US, could you check on the eShop notifications this week and tell me if it mentions anything about it? If not, you USA peeps might have an extra week or so.

Anyway, that’s the basic premise. In a way, I think it’s quite nice that this version will become a limited release exclusive, and hopefully everyone who got it had a good time playing it (hopefully not too frustrating in areas 😉 )”

Ultimately, the game was delisted in all territories though a sequel on the 3DS, Kokopolo 3D – Space Recipe For Disaster, was finally released in 2017.

“ Get ready for a brand new experience in arcade action – the worlds first Chase ’em up! Take control of Kokopolo, the hyperactive wildcat, in a crazy, fast and frantic, action-packed caper set across 80 stages of pure arcade mayhem.

Hunt down those responsible for disturbing your afternoon slumber, with a quick slash from your sharp claws, and lure them into an epic chase, through mind-twisting mazes, and across hazard filled highways…finally leading them to their doom, in the bellies of the ever-hungry, carnivorous Snap Snap plants! But the fun doesn’t end there, once the unsuspecting enemies have been devoured, focus shifts to the low screen, where perfect touch-timing must be utilised in order to digest the enemies once and for all.“


Thanks to Aipompous for submitting some extra info to the site