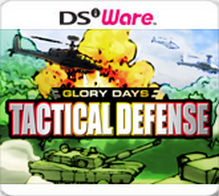 Create your Symphony of chaos!

TIME TO GET TOUGH!
The howling sandstorms blaze across the barren plains.
A violent storm is brewing on the horizon.
Get ready to repel the waves of enemies amidst the finely orchestrated chaos.

EXPERIENCE 3D COMBAT ACTION
As the ground trembles, artillery is being massed in the distance.
If you are outnumbered by the enemy, move your units to high ground for a strategic advantage.

VERSATILITY, RESPONSIVENESS
Use your AAA to shoot down enemy planes, fight off tanks with your guns and sink subs with your missile launchers.
Master the battlefield by using the “Big One”, a gun that will terrify and cause devastation among all units, enemies and friends alike.

MORE INTENSE, MORE TACTICAL
Expect your units to suffer losses under enemy fire! Repair and improve them because the show must go on.
When the dust settles, you may have attained glory, even if the battle is lost.