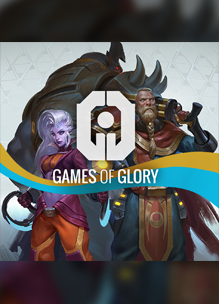 Games of Glory was first delisted on PlayStation 4 in the latter half of 2020. We found confirmation that it was still available in early May with the last capture of its PlayStation.com page showing it as potentially still available in early August. It was likely delisted between August and the end of 2020. Lightbulb Crew then announced on February 11th, 2021 that online services for the game on Steam would be shut down on March 26th, 2021. Development was stopped in November of 2017 but the game had remained accessible on both platforms despite some periodic outages.

The Steam service for Games of Glory will be ending on March 26th, 2021 at 00:00 UDT+1. We shared four fabulous years with you. From the Lightbulb Crew team, thank you for your support over the past years. For the last weeks, we give you the opportunity to play freely ALL THE CHARACTERS of the game to complete your journey in Svandia and Akasha.

Games of Glory is a fast-paced multiplayer game, with a top-down view specially designed for action. Jump right in the fight, work with your teammates, and become an intergalactic star! This twin-stick shooter combines unique characters and their kits with a free-aiming shooter-grade weapons system, to deliver an all new type of high-speed action arena game.

In Games of Glory, the only way to overcome your foes is to go for the objectives. There are no minions or laning phases. Our game modes and their assigned maps are designed around this point of view. We push players to fight for control and achieve victory.

At release, Games of Glory will feature two different game modes and a training room. Arkashan Arena (Dominion Game Mode, 4v4) matches last from 15-25 minutes. You and your teammates will fight to control victory and credit points in order to lower the enemy forcefield, penetrate their base, and destroy their energy core.

Svandia’s Foundry (Superstar Game Mode, 3v3) matches last from 8-15 minutes, and unfold in a series of short 1-2 minute rounds. Each round, one player on each team is randomly designated as Superstar. Each team must fight to kill the enemy Superstar while protecting their own.

Play your friends on PlayStation®4 and on PC – together in the same match! Create Clubs together, fight your way through the ranks, and rise to the top.