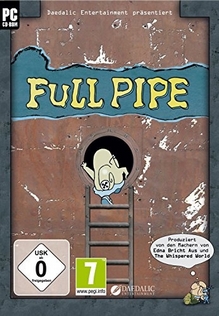 Full Pipe was delisted from Steam on November 24th, 2014 for unknown reasons. Speculation has suggested it was caused by an issue between PipeStudio and publisher 1C but it may have simply been the end of a publishing deal that resulted in the game’s removal.

As early as September of 2015, the game was released on Android and iOS with the help of two other publishers. Physical copies for PC have also been released in Russia and across Europe.

“No one knows the name of the main character, thus let’s simply call him Dude. Having a good sleep was his first plan for Saturday, however an alarm clock set to 11:30 caught him napping. Hey, and where’s a slipper gone? Today just seems like it’s gonna be a rough day…“