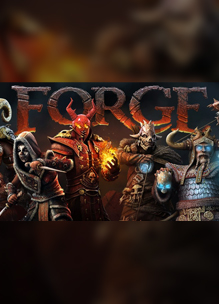 Forge was shut down and delisted on Steam on January 8th, 2015. Previous to this, the game transitioned to a free-to-play model in 2013 but apparently didn’t generate enough active players or profit from in-game items to sustain development beyond 2014. The spin-off title, Forge: Ymil’s Revenge, was delisted a few days later on January 10th, 2015. Dark Vale Games posted on the franchise homepage in regards to both Forge and Forge: Ymil’s Revenge:

Thank you for 3 years of support and gameplay! The team at Dark Vale couldn’t have done it without you! Unfortunately, it’s expensive to keep a game live. And without additional investment, we’re forced to take a bit of a hiatus. We’re hopeful that things turn around and we can get back to work on building out the Forge Universe. And if any of you know a Daddy Warbucks, please send him our way!

–The Team at Dark Vale Games

Forge™ is an online, class based multiplayer shooter set in a distinct fantasy universe. Forge features only the best aspects of MMO and FPS class based combat to provide a multiplayer gameplay experience unlike anything you’ve played before.

A malicious being named The Devourer has swallowed the great pantheon of gods. Seeking escape, the trapped gods have deceived great warriors, zealous adherents and placed them on a faceless world called FORGE, designed sacrifice the weakest of these warriors in order to grow their own power. Choosing one of five unique warrior classes, the player must battle head-to-head with other players in a bid to free their god from the clutches of The Devourer. Armed with a set of powerful and unique abilities as well as a powerful and deadly ally, each warrior must overcome the varied challenges of Forge where every kill is a sacrifice and every sacrifice brings them one step closer to freedom.